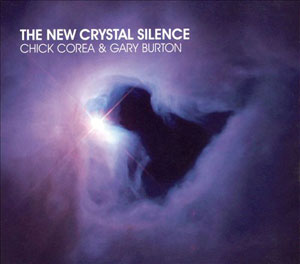 By the time “Crystal Silence” was recorded in 1972, Chick Corea and Gary Burton had each originated distinctive voices on their respective instruments, become bandleaders of the first order and had produced a number of significant genre defining recordings on their own.

Both men, astonishingly barely into their 30’s at the time, had long since become iconic figures in the important research that was happening during this pivotal and important era in jazz.

As players they shared a rare ability to offer deep and insightful levels of narrative exposition within the jazz form while regularly relocating its boundaries by offering a running on-the-ground commentary to the radically changing culture that surrounded them.

Additionally, in their individual careers they had both been able to successfully advance the reach of jazz itself into the culture at large in the ways that the major innovators of each generation are uniquely called upon to do.

Yet their meeting as duet partners represented still another conceptual advance. While there were a handful of excellent duet collaborations scattered throughout jazz history, they were few and far between. And a meeting of two musicians with kind of harmonic skills and general improvisational virtuosity exhibited with such guileless abandon on “Crystal Silence” was all but unprecedented.

With truly spontaneous and advanced improvisational fluency and flawlessly precise ensemble playing (two rare qualities on their own rarely seen with this kind of abundance in equal measure) their duo instantly became one of the best bands in the world, and has continued as such for 35 years now.

I have often contended that Gary Burton is one of the best improvisers of all time - not just as a vibist, but among all players. The range of melodic options that he brings to the table nightly is staggering in its vastness. One of the great features of this collaboration is the perfect fit that this format offers Gary. Playing with Chick affords him the chance to investigate the full range of his gifts in this area completely.

And along with being one of the most important and influential pianists in jazz, Chick Corea stands as one of the greatest composers in the modern era. Since Thelonius Monk, with the possible exception of Wayne Shorter, there is no other writer in jazz who has contributed as many compositions that have risen to the status of “standards”, played as regularly and with such passion at jam sessions and on record dates around the world on a daily basis as his tunes are.

Certainly one of the most exciting aspects of the Corea/Burton story is the meeting of Chick the composer with Burton the improviser. Chick really knows how to write for Gary (and has a deep appreciation and understanding of the vibraphone itself) and Gary (himself a great piano player) understands like no other how to illuminate every detail to be found in the nooks and crannies of Chick’s intricate writing style.

Yet underneath the hood of this unit lie many of the subtle aspects of what makes really great playing transcend to great art.

Both Chick and Gary are incredibly effective listeners. The way they are able to read and react to each other on both the macro and micro level is what ultimately defines their most fertile collaborative territory and one of the many reasons why their work together stands apart.

“Waltz for Debby” on this recording is a perfect example. The degree of harmonic sophistication at work here from either player would be enough to require a hefty size book to describe in detail. That they are joining together with this kind of joyful fearlessness as improvisers to honor the tune, respond to each other as accompanists as well as soloists, and then have each idea weigh in with the sense of inevitable direction and meaning contained within is a reminder once again of just how great “great” can be.

As the years have gone on, it is exciting to see that Gary and Chick have continued to play and grow together. This record happens to be one of their very best, with a perfect blend of their duet playing and an expansive look at what their duo implies on an orchestral scale from Tim Garland’s magnificent and creative arrangements.

When “Crystal Silence” came out, there was a freshness about it that was so beautifully captured by the title, the gorgeous photo on the cover and everything that was included in the tunes, the improvising and the general conception of the music. That freshness remains, 35 years later, enhanced by 3+ decades of life experiences shared.

There is a sense of infinity and eternity here, as if Chick and Gary could take any worthy piece and play it forever, finding new things each time around. That sense of endlessness offers hope and inspiration. That is the message of this music to me.