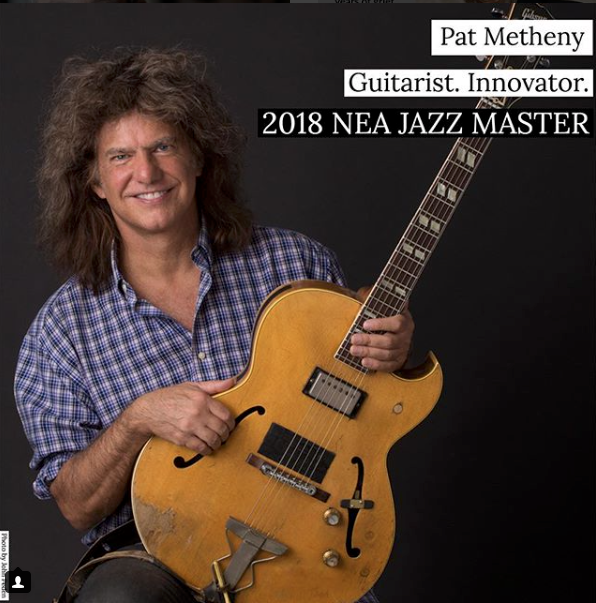 It has been such a privilege for me to have lived alongside and worked closely with so many of the greatest musicians of our time. Several of them have also received this award in recent years, among them; my most important mentor, Gary Burton, who I could never thank enough for so many lessons learned along the way; my best friend in life, Charlie Haden, who i miss every single day; and my two all-time favorite drum heroes, Jack DeJohnette and the great Roy Haynes - also two of my favorite people in the world. To be noted among them and so many of my other major heroes in this music tonight is an almost overwhelming honor.

When I look at the community of musicians recognized historically by this distinction, representing an almost indescribably wide variety of musical dialects, I see one common thread; a complete commitment to creativity, a commitment to represent who they are and where they came from with honesty and integrity and soul - a commitment to bring a sound into the world that reflects their own personal experiences and individuality.

To me, that mission is the central objective in this music, and my goal has always been to do my best to try to meet that aspiration.

As musicians, we find ourselves trading in a currency that has way more actual value than many people at the top might realize. Sometimes it takes years, decades even, for the true impact of what this community has offered to be felt.

Politicians come and go. Great music has way of lasting and remaining influential for a really, really long time. Anyone seeking long term political influence should probably pay attention to that.

What is represented in this music at its best and the incredible range of musicians who populate it is often transcendent of the culture it is made in, even while being deeply formed by the forces at work at the time of its inception.

Right now, without question, there are major cultural and political challenges that we all have to face. It is important to note whenever possible how the language of music, and this music in particular, offers its value intrinsically and fundamentally within the currency of good notes and sound itself with little regard for the more everyday kinds of ways that folks tend to measure value.

The messaging system that that has evolved through the work and research of the practitioners of this music, the actual values that we trade in every night, can serve as a ideal model for many of the goals that we collectively aspire towards as human beings and as a society.

Having lived through a number of political ups and downs, if I think back on my favorite music, it is hard to remember which administration was in place during this or that time; the hard currency of music and the arts in general has a way of going far beyond any of that.

Even if the work at hand is formed through the tensions of a particular time and place, the best music suggests a way of living and being that often provides a kind of timeless substance that goes way past the immediate conditions of its creation, even while presenting sometimes important perspectives on current events or the circumstances of history that affected its arrival.

One important thing to note on this front; The NEA really understands all this. The fact that we are all together here tonight is a testament to that. It is very important for all Americans to fight for and support its continued survival. It represents on an institutional level the soul that a functioning democracy must have to exist.

In closing, there is one observation that I had over the years that i try to point out to musicians as often as i can. The majority of people who will get the most out of this music are likely not on the planet yet. Our biggest audience and the folks who will gain the most from what we are all working so hard on and are so committed to are quite possibly not even born yet.

There is a very particular kind of faith revealed in knowing that and still devoting every waking minute to finding the right resolution, the right groove, the right ways to push and pull

and to fight and to listen. What we are all swinging for is something eternal.

It is always worth it, no matter what the struggle. This music at its best is proof positive of the true value represented in that faith; a kind of value that makes the contents of Fort Knox seem utterly insignificant in comparison in the larger scheme of things.

The essence of music somehow contains the secrets of how we all got here and where we are all going.

What a privilege it has been to live a life inside that music.

Once again, Thank You to the NEA for this incredible honor - I am humbled and grateful beyond words. 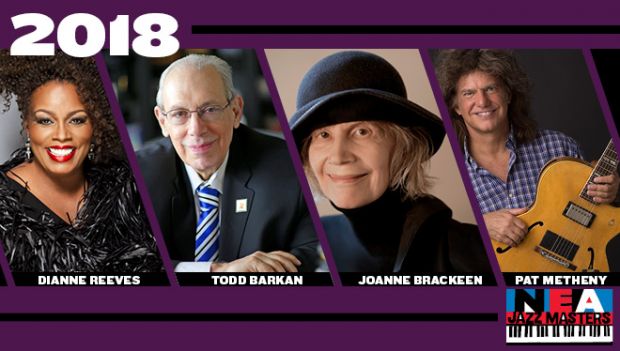 Washington, DC—Joanne Brackeen, Pat Metheny, Dianne Reeves, and Todd Barkan now join the ranks of the nation’s highest honor in jazz, the NEA Jazz Masters. The 2018 NEA Jazz Master recipients were announced this evening at a DC Jazz Festival concert at the John F. Kennedy Center for the Performing Arts in Washington, DC, where Metheny also performed. The NEA Jazz Masters are receiving this honor for their lifetime achievements and exceptional contributions to the advancement of jazz. Each will receive a $25,000 award and be honored at a tribute concert on Monday, April 16, 2018, in Washington, DC.

“The NEA Jazz Masters represent the very pinnacle of talent, creativity, innovation, and vision,” said NEA Chairman Jane Chu. “We look forward to celebrating these four new Jazz Masters and their many contributions to jazz.”

Whatever the musical setting, whether solo, duo, trio, quartet or quintet, pianist Brackeen's unique style of playing commands attention. In addition to her captivating and complex improvisations, she has written intricate, rhythmically daring compositions in a wide stylistic range.

Metheny reinvented the traditional sound of jazz guitar, bringing a fresh sonic potential to the instrument while offering a deep reservoir of improvisational insight and musicality. While his music resists any easy description, his compositions cover a wide range of settings, from modern jazz to rock to country to classical.

Reeves can effortlessly sing in whatever style she wants with her far-reaching range, whether it’s rhythm-and-blues, gospel, Latin or pop. But jazz always was—and continues to be—her musical foundation.

Barkan is the recipient of the 2018 A.B. Spellman NEA Jazz Masters Fellowship for Jazz Advocacy, which is bestowed upon an individual who has contributed significantly to the appreciation, knowledge, and advancement of the art form of jazz. Barkan’s name is inextricably associated with the Keystone Korner, a San Francisco venue he had opened in 1972 and then managed for more than a decade. He also worked as a record producer and for Jazz at Lincoln Center.

The 2018 NEA Jazz Masters Tribute Concert – produced in collaboration with the Kennedy Center, whose artistic director for jazz is Jason Moran – will take place on Monday, April 16, 2018 at 8:00 p.m. at the Kennedy Center’s Concert Hall and also streamed live. This concert will be free and open to the public; more information on how to obtain tickets will be available in early 2018. An archive of the 2017 NEA Jazz Masters Tribute Concert, which also took place at the Kennedy Center and included a performance by Dianne Reeves, is available here.

The NEA also supports the Smithsonian Jazz Oral History Program, an effort to document the lives and careers of NEA Jazz Masters. In addition to transcriptions of the comprehensive interviews, the website also includes audio clips with interview excerpts. This project has transcribed the oral histories of nearly 100 NEA Jazz Masters.

About the National Endowment for the Arts
Established by Congress in 1965, the NEA is the independent federal agency whose funding and support gives Americans the opportunity to participate in the arts, exercise their imaginations, and develop their creative capacities. Through partnerships with state arts agencies, local leaders, other federal agencies, and the philanthropic sector, the NEA supports arts learning, affirms and celebrates America’s rich and diverse cultural heritage, and extends its work to promote equal access to the arts in every community across America. Visit arts.gov to learn more about NEA.

About Kennedy Center Jazz
Kennedy Center Jazz, under the leadership of Artistic Director Jason Moran, presents legendary artists who have helped shape the art form, artists who are emerging on the jazz scene, and innovative multidisciplinary projects in hundreds of performances a year. The KC Jazz Club, launched in 2002 and dubbed “the future of the jazz nightclub” by JazzTimes, hosts many of these artists in an intimate setting; while the Crossroads Club, launched in 2012, is a nightclub dance venue. Annual Kennedy Center jazz events include the professional development residency program for young artists, Betty Carter’s Jazz Ahead; NPR’s A Jazz Piano Christmas, the Kennedy Center holiday tradition shared by millions around the country via broadcast on NPR; and the Mary Lou Williams Jazz Festival, created in 1996 by the late Dr. Billy Taylor (Kennedy Center Artistic Director for Jazz, 1994–2010). The Center’s jazz concerts are frequently recorded for future broadcast on NPR.